Cherry Almond Cola Bread, loaded with maraschino cherries and topped with almonds and a cherry cola glaze, is an easy and delicious dessert bread. 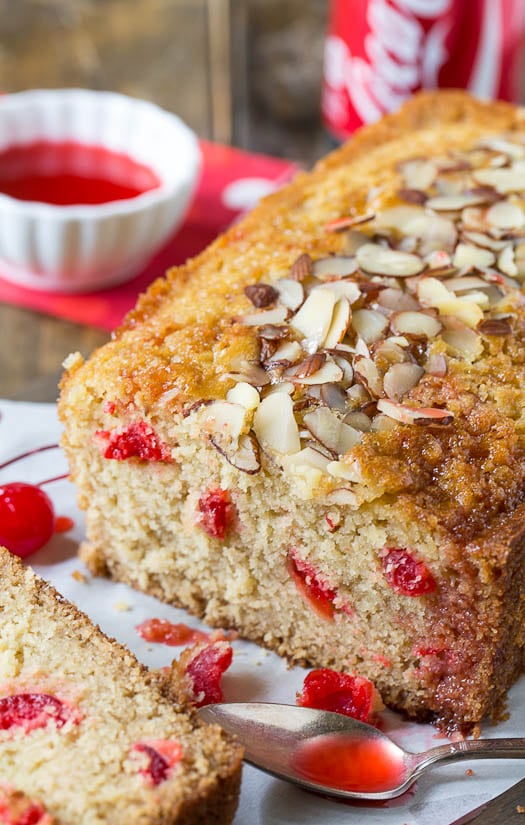 This bread came about because I had 3 jars of maraschino cherries in my pantry and 2 in my refrigerator. Now, except for food styling the occasional cocktail, I really don’t have much use for maraschino cherries. How I ended up with so many jars, I don’t know.

What I do know is that Cherry Almond Cola Bread is an easy to make quick bread bursting with that of so recognizable, extra-sweet maraschino cherry flavor. It’s perfect served with a cup of coffee or as a dessert.

The cake itself doesn’t have a whole lot of sweetness except for the bursts of sweetness from the cherry chunks. The Cherry Cola Glaze however is extra sweet. Drizzle as much or as little as you like over the bread to control the sweetness.

A little almond extract in the batter and sliced almonds on top give wonderful flavor to the bread. 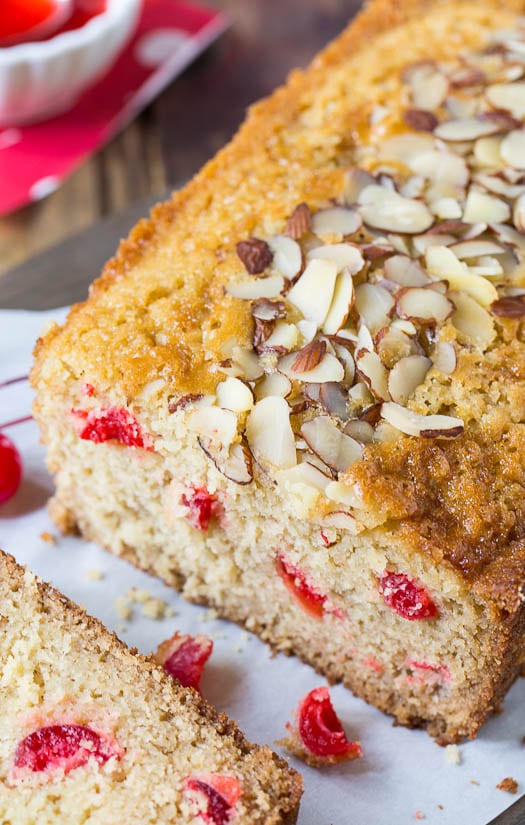 Whenever I eat dessert bread, I like to eat it with my fingers, taking one tiny bite at a time. Usually I’m doing something like reading while I’m eating it.

Which reminds me to tell you that I just read such a wonderful book. I’m embarrassed to say it’s the first novel I’ve read in quite a few years. I love to read, but it is just so hard to find the time and I hate to say that spending time on the internet has replaced my reading time.

But this summer I’m determined to change that.

Anyways, I had wanted to buy a book to take to the beach. There’s nothing better than reading on the beach is there?

Because I put off planning for our trip until last minute, I had no choice but to make my book selection at Target while doing some last minute beach shopping.

BTW- When did the selection of beach towels become so poor and overpriced? If anyone is looking to start a business, I say make good quality, attractive beach towels at a reasonable price and I’m your first customer. I did have to resist the urge to buy my 17 year-old son a Batman towel as a joke. I would have if it hadn’t been practically as thin as lace and felt like sandpaper. 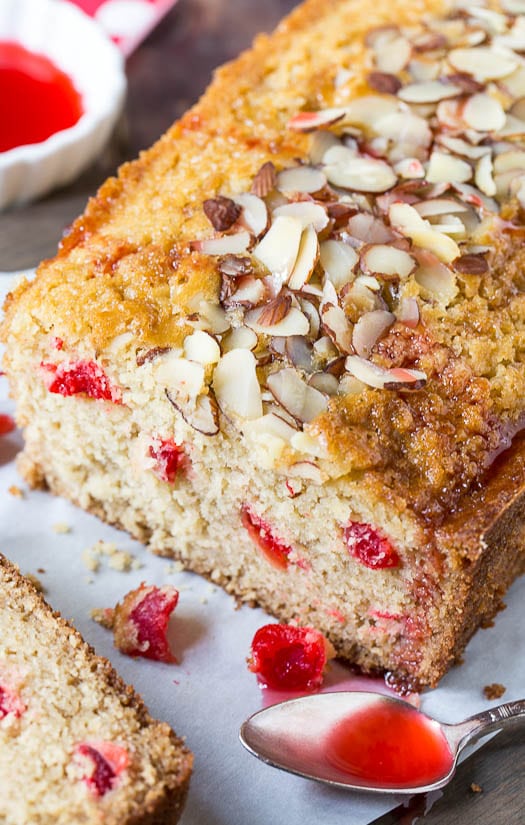 Impressed with the selection of books at Target, I chose 5 books, ignoring my daughter’s objections. I’m picky about the books I like and I wanted, needed to read one that I really connected with. I started one and didn’t really get into it so I started a second one  and it was one of those books you stay up all night reading, but then, when you get close to the end, you read as slow as possible because you can’t bear for it to end.

Even better, it was about a food blogger and her best friend a travel writer.

So if you’re still looking for some summer reading, check out Sweet Salt Air: A Novel

and maybe make a batch of Cherry Almond Cola Bread to munch on while you read.

Recipe adapted from Taste of the South